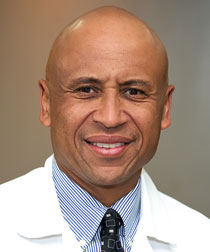 Dr. Robert Gillespie, born and raised in Gary Indiana, received his undergraduate degree from UCLA and his medical degree from the University of Chicago, Pritzker School of Medicine.  He completed his internship and residency at Loyola Medical Center in Chicago and completed his fellowship in cardiology at Harbor-UCLA Medical Center in Los Angeles.  He is board certified in internal medicine, cardiology, nuclear cardiology, echocardiography and cardiac computed tomography.  He is director of the Nuclear Imaging Department at Sharp Rees-Stealy Medical Group.  He has been with the group for over 28 years.  For a year he taught at University of California, San Diego as an assistant professor on a volunteer basis.

Dr. Gillespie has lectured frequently to his colleagues both on a local, and national level on a variety of topics including hypertension, congestive heart failure, atrial fibrillation, hyperlipidemia and multiple topics related to cardiac imaging. He also recently lectured in Egypt for the Egyptian Society of Cardiology national meetings and in Paris for The International Society on Disease Prevention. He is a member of several professional societies including the American College of Cardiology, American Society of Echocardiography, American Society of Nuclear Cardiology and he is a past Chairman of the Board for the Association of Black Cardiologists (ABC).  He is past co-chair of the heart failure and acute coronary syndrome committees at Sharp Memorial Hospital, as well as a number of other of other hospital committees.

Dr. Gillespie remains very active in clinical research.  His primary research interests have been related to imaging the heart with echocardiography, nuclear and CT.  He has published in a number of journals such as American Journal of Cardiology, and Heart.  He previously co-authored a statement regarding cost effectiveness of stress myocardial imaging for the American Society of Nuclear Cardiology.   He has been primary investigator or co- investigator on a number of clinical trials particularly in the area of congestive heart failure that have been published in Circulation, The Journal of the American College of Cardiology and others. He was co-first author on an article published on July 29, 2014, addressing the 2014 hypertension guidelines. This article went on to be chosen as the most influential article on hypertension in JACC for 2014. He then co-authored another article in JACC in 2015. He was a co-author on a chapter in the book titled “Cardiovascular Disease in Racial and Ethnic Minorities” published in September 2009 and most recently co-authored a chapter on coronary calcium scoring.  He has appeared on the Best Doctors list both locally and nationally. He was recently featured on ACCEL, the prestigious podcast produced by the American College of Cardiology (ACC).  He has chaired sessions at both the national meetings for the ACC in 2015, 2016 and was scheduled to present again at the ACC meetings in Chicago March 2020, which was canceled due to COVID-19.  He has been featured on multiple media segments on San Diego news as well as other Sharp Healthcare segments for local media.

Dr. Gillespie remains active in his community.  He is the medical director for The San Diego Black Nurses Association; a group that he feels plays a major role in improving the health care of San Diego African American patients.

He is actively involved as the trusted messenger for the COVID-19 Taskforce of San Diego County and educating his church on this devastating disease.

He frequently provides educational programs for local organizations and churches on topics ranging from patient empowerment to hypertension.  He has trained members in the community on cardiovascular disease so that they can be empowered to share their knowledge with others to decrease the devastating risk factors that plague the African American community.  He was previously awarded a Community Pillar Award by Sharp Healthcare for a project that trained 45 members in the community to be heath advocates. He was also recently honored by the American Heart Association receiving the Lifesavers distinction for his work in the San Diego community focusing on reducing cardiovascular diseases. His church honored him as a recipient of the “Pillar of Light” award for his community outreach.  He received the San Diego Urban League Diversity and Equity Award in December 2017.  In 2018, he received the Chamber of Commerce Healthcare Award for excellence and leadership in cardiology.

He is a member of Alpha Phi Alpha Fraternity and is past president for his local chapter of Sigma Pi Phi Fraternity.

He is married to Lisa Gillespie and has two college children, Jayden age 21 and Morgan age 20.